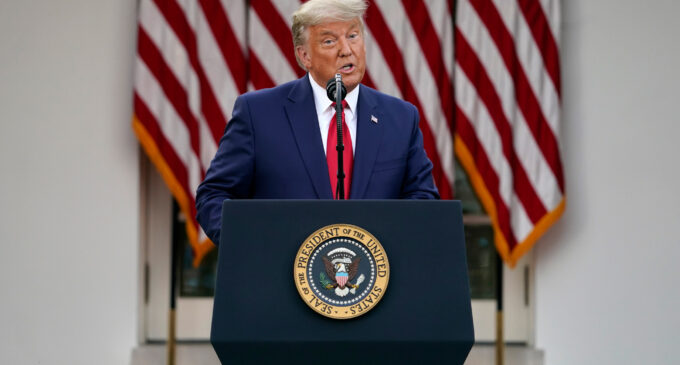 His tenure ends in a few hours, as Joe Biden takes over as the 46th president of the US on Wednesday.

While giving his farewell speech on Tuesday, Trump listed some of his achievements in politics, economy, health, and security.

He expressed gratitude to all Americans for their support and cooperation during his tenure as president, saying “the world now respects us”, and urged the incoming administration to ensure that America doesn’t lose that respect.”

According to him “Incomes soared, wages boomed, the American Dream was restored, and millions were lifted from poverty in just a few short years. It was a miracle. The stock market set one record after another, with 148 stock market highs during this short period of time, and boosted the retirements and pensions of hardworking citizens all across our nation. 401(k)s are at a level they’ve never been at before. We’ve never seen numbers like we’ve seen, and that’s before the pandemic and after the pandemic,” Trump said.

“We rebuilt the American manufacturing base, opened up thousands of new factories, and brought back the beautiful phrase: ‘Made in the USA’.

“To make life better for working families, we doubled the child tax credit and signed the largest-ever expansion of funding for childcare and development. We joined with the private sector to secure commitments to train more than 16 million American workers for the jobs of tomorrow.

“When our nation was hit with the terrible pandemic, we produced not one, but two vaccines with record-breaking speed, and more will quickly follow. They said it couldn’t be done but we did it. They call it a ‘medical miracle’, and that’s what they’re calling it right now: a ‘medical miracle’. Another administration would have taken three, four, five, maybe even up to 10 years to develop a vaccine. We did in nine months.

“We grieve for every life lost, and we pledge in their memory to wipe out this horrible pandemic once and for all.

“When the virus took its brutal toll on the world’s economy, we launched the fastest economic recovery our country has ever seen. We passed nearly $4 trillion in economic relief, saved or supported over 50 million jobs, and slashed the unemployment rate in half. These are numbers that our country has never seen before”

Trump further made some indirect reference to the suspension of his social media accounts, as he noted that there was a need to discourage the shutting down of open debates.

He called for better understanding on accommodating varied opinions, adding that America’s unity in diversity is what makes the country great.

“The key to national greatness lies in sustaining and instilling our shared national identity. That means focusing on what we have in common: the heritage that we all share. At the centre of this heritage is also a robust belief in free expression, free speech, and open debate,” he said.

“Only if we forget who we are, and how we got here, could we ever allow political censorship and blacklisting to take place in America. It’s not even thinkable. Shutting down free and open debate violates our core values and most enduring traditions.

“In America, we don’t insist on absolute conformity or enforce rigid orthodoxies and punitive speech codes. We just don’t do that. America is not a timid nation of tame souls who need to be sheltered and protected from those with whom we disagree. That’s not who we are. It will never be who we are.”he added

...meets to discuss on actions to take NEWSDAILYNIGERIA: The National President of Papal Knights and Medalists in Nigeria, (APKMN)...
Read more
News

NEWSDAILYNIGERIA: The Nigeria Union of Journalists, ( NUJ) has concluded arrangements to embark on its Democracy dividend tours to states across the...
Read more
News

By Sunday Isuwa, Abuja NEWSDAILYNIGERIA: The immediate past President of the Christian Association of Nigeria (CAN) His Eminence, Rev...
Read more

...meets to discuss on actions to take NEWSDAILYNIGERIA: The National President of Papal Knights and Medalists in Nigeria, (APKMN)...
Read more

NEWSDAILYNIGERIA: The Nigeria Union of Journalists, ( NUJ) has concluded arrangements to embark on its Democracy dividend tours to states across the...
Read more

By Sunday Isuwa, Abuja NEWSDAILYNIGERIA: The immediate past President of the Christian Association of Nigeria (CAN) His Eminence, Rev...
Read more
Load more