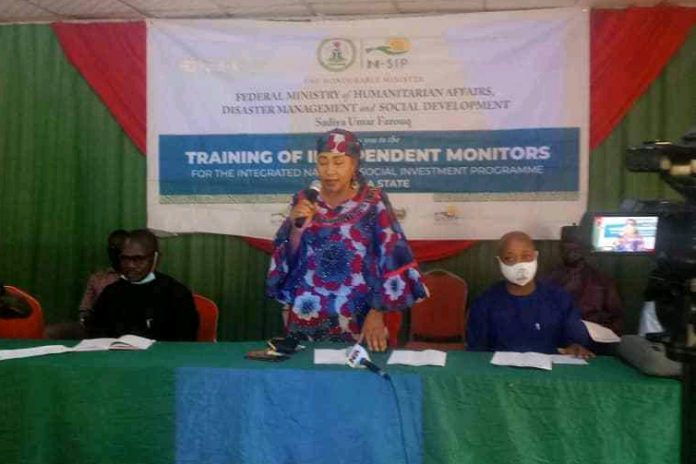 NEWSDAILYNIGERIA -The Federal Government through the Ministry of Humanitarian Affairs, Disaster Management and Social Development on Monday has commenced training of Independent Monitors for National Social Investment programme in Taraba state.

Flagging off the training, the minister Hajiya Sadiya Farouq,represented by Mr Silas Wuya,the chief adminisnitration officer of the ministry urged the Monitors to pay attention to training so as to successfully carry out their assignment at the end.

Farouq told the Monitors that President Muhammadu Buhari was totally committed to using the social investment programmes in lifting 100 million Nigerians out of poverty in the next three years, urging them to be committed to making it a reality

The Minister further congratulated the Trainees on their selection as Monitors of the programme in Taraba State,saying

“I want to urge you all to pay attention to the training so as to succeed at the end of the day in doing the job well for the benefit of the people of the state,”

Kichina commended the Minister for coming up with laudable policies that were very beneficial to the people of the state and the nation.

She charged the Monitors not to compromise when they eventually commenced the assignment after the training for the good of the people of the state.

Mr Bitrus Nyaama, the Taraba Director, National Orientation Agency (NOA) noted that agency would continue to monitor everyone involved in the social investment programme including the independent monitors to enhance success.

--Says Chad Is Ruled By Illiterates, most poorest on earth NEWSDAILYNIGERIA- Some Chadian socio- political activists have called on the international community to help Chad...
Read more
News

NEWSDAILYNIGERIA- The son of Chief MKO Abiola, winner of the 1993 presidential election, Alhaji Jamiu Abiola has floated a foundation named after his mother,...
Read more

--Says Chad Is Ruled By Illiterates, most poorest on earth NEWSDAILYNIGERIA- Some Chadian socio- political activists have called on the international community to help Chad...
Read more

By Ibe Pascal Arogorn NEWSDAILYNIGERIA- The peoples of Nigeria must be united to enable this country to play a full part in shaping the destiny...
Read more