NEWSDAILYNIGERIA-  The Federal Neuro Psychiatric Hospital Kaduna has unveiled the many laudable  Federal government Covid 19 intervention projects ongoing in the  Hospital which will soon be commissioned for public use.

The hospital is one of those that benefited from the Federal Government intervention at the wake of the pandemic to  ensure that our healthcare facilities are equipped to meet the emerging challenges, inline with the Federal government’s vision 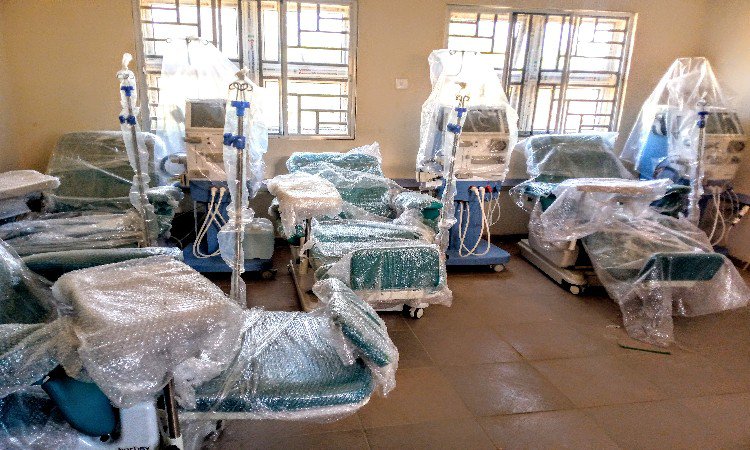 Shortly after taking Journalists on Media fact finding tour of  projects,on Tuesday,the Medical Director of the Hospital, Professor Abdulkareem Jika Yusuf said the hospital through the federal government intervention has been able to build 16 bedded isolation centre in the hospital ” 10 bedded for general ward and 6 bedded for VIP ward and it’s meant to cater for people with highly infectious diseases”

He said the Hospital is now fully equipped with a Dialysis centre,with 4 Dialysis machines, mechanical ventilators and respirators and pipe oxygen in both isolation centres, intensive care unit and a mobile X-ray facility couple with the other e- facilities in the hospital.

He further noted that with four Dialysis machines and ICU,patients are better attended to without going out of the confine of the state ” now that we have it,we can be able to dialyze four patients at the same time,so we are able to do much” he added.

He disclosed that,with the new world class  Bio safety,three level molecular laboratory the hospital is able ” to diagnose most of the infectious diseases not only Covid-19 virus,but also Ebola, Lassa virus and other infectious viruses”

Among the several Covid-19 projects intervention in the Hospital include 2 Brand new 18-seaterAmbulance buses, a new emergency unit, a completed substance abuse centre among others, waiting to be  commissioned later in June.

He assured the public of accessible and affordable services as soon as it’s commissioned ” I can assure you that our services is affordable,we are one of the cheapest Federal institutions,adding that even when people don’t have money, we have an indigent patients’ fund that is managed by the staff of the hospital “

While appreciating the merit award by NUJ recently on his leadership feat as Medical Director of the hospital in the last 3 years he said ” The recognition is not only for me,it’s for the whole management team,governing board and staff of the hospital because without them,we won’t be able to achieve this development ” he reiterated

NEWSDAILYNIGERIA- In order to fast track the completion of an ongoing work of the State University Teaching Hospital, the Governor of Borno State, Professor...
Read more
News

NEWSDAILYNIGERIA- In order to fast track the completion of an ongoing work of the State University Teaching Hospital, the Governor of Borno State, Professor...
Read more

.As Speakers lament absence of Peace, sue for Peace. By Frederick Peters, KADUNA NEWSDAILYNIGERIA- The Zaman Tare project of the Catholic Caritas Foundation of Nigeria, has...
Read more
Load more